I was tagged by Shannon two weeks ago. And since I feel about a week and a half behind on everything in my life right now, I'm finally getting around to it.

Since SuperDad is upstairs entertaining the kids (I hear shrieking, thumping and lots of giggling, so I'm assuming that whatever is going on is entertaining) this would be the perfect time to answer questions about him!

His full name? Corey Leon Jones (Every single person born into the Jones family has a middle name that starts with L. Everyone except my kids. I'm the black sheep of the Jones family.) :)
How long married? 10 years this summer.
How long dated? 3 1/2 years. Our first date was the Christmas Dance, my senior year of high school.
How old is he? 35 (3 1/2 years older than me)
Taller? He is. But only by an inch or two.
Who can sing the best? I would have to say me, but only because he doesn't sing. At least not if he thinks anyone can hear him. I know he sings in his truck, though. And he does do a pretty good John Denver and a really good Johnny Cash.
Smart? He would say me, but there are lots of things that he is smart about that I don't have a clue.
Laundry? 50/50. In the 9 years we have lived here, I never washed a single load of his "work" clothes. He does them all. I do most of my clothes, he does his and we both throw in loads of the kids clothes, towels or sheets. (Folding is me, though. He's not a very good folder.) :)
Paying bills? Me.
Who sleeps on the right side of the bed? Facing the bed, he does. Always.
Mows lawn? He does. I'm a little ashamed to admit that I have never, ever mowed the lawn. Any lawn. I was going to once to surprise him, but I couldn't figure out how to start the mower and I was too embarassed to ask our neighbor to help me.
Cooks dinner? Again, 50/50. Or maybe 60/40. And some weeks 70/30. If I could have my choice between a maid and a cook, I would totally choose the cook. I can cook. I just don't love it. And I'm not good at the planning ahead part.
First to admit they are wrong? We're both pretty stubborn, but I would have to say him. He's a very good apologizer. (that's a word, isn't it?!)
Who kissed first? He kissed me. But I was pretty okay with it. ;)
Who wears the pants? I think we both do. I know some people don't agree with that and I've been criticized for not being submissive enough, but I don't see anything wrong with making decisions together. (And that doesn't mean I don't respect him. Because I do. A lot. Hardest working guy I know.)
And here he is... 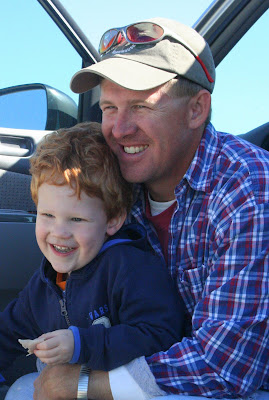 I know this is the third time I've posted this picture. But I love it. One of my all time favorites. And my two favorite guys.
Now I tag: Pam, Sarah, Jenn and Megan. Hopefully you will be a little faster than I was!
Posted by Amy at 9:31 AM