Frustrated.
Disappointed.
Embarrassed.
Angry.
More disappointment.
Because of swimming lessons.
Or the lack of them today.
We're doing private lessons again and Monday was our first day. Sophie took lessons last year... which were a little frustrating. So I was prepared.
But they both did great! 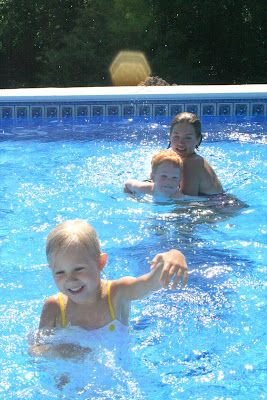 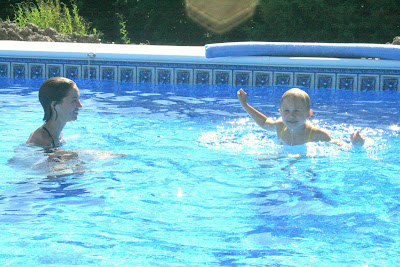 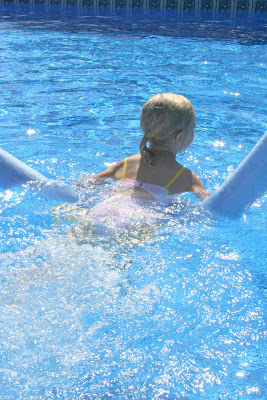 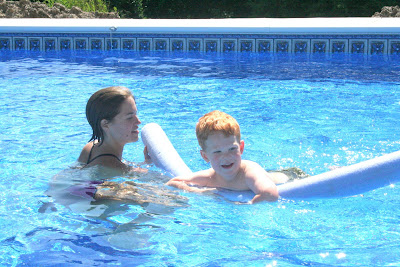 doing everything Amber asked them to do, 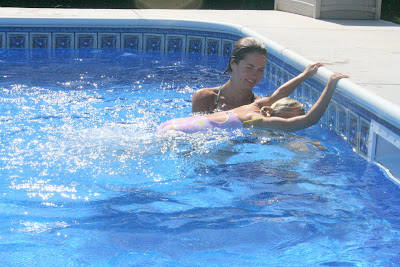 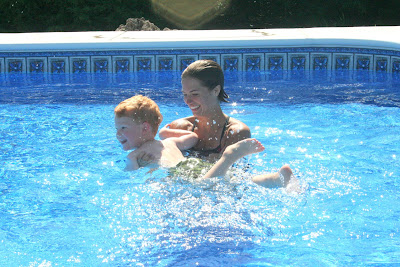 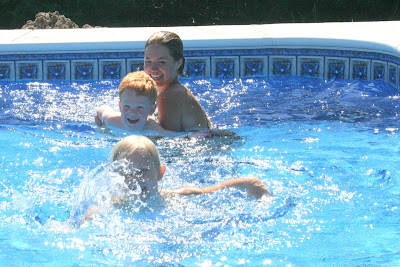 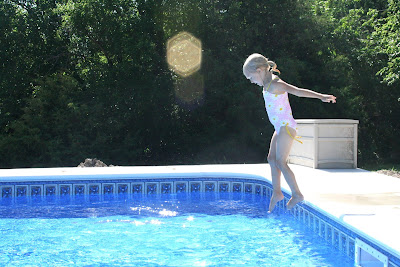 Just like swimming lessons should be.
So I wasn't prepared for today.
In hindsight I can see some of the things that led up to it...
We talked on the drive there about some other kids (Sophie's age) who were swimming all over the place at our friend's the other day. Going in the deep end, by themselves. Another friend wisely pointed out to me that these are both younger siblings, trying to keep up with their older siblings. I know that. I know how different they are from Sophie. But still, I let myself compare her to them.
We talked about how maybe she could jump in the deep end with Amber. She didn't want to.
There was a big (very friendly) dog that ran to meet us when we got there. Very friendly, and not at all scary for some kids, but she was scared. Amber's mom, dad and little brother were there, helping shoo away the big friendly dog. ("all those people watching"... I figured out later.)
I see now that all of this added up to her being a little scared when she got there. And for some reason, she has trouble kicking and keeping her little rear up out of the water. So this led to frustration on her part. She couldn't do it right. Couldn't do it perfect. And "all those people" (who were in the house) were watching her fail. And she didn't like that.
I read this book a little over a year ago. 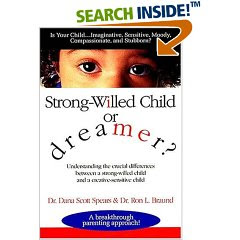 Completely changed my whole mindset about my daughter. I have never highlighted so much in a book before. I had read Dr. Dobson's "Strong Willed Child" and it didn't fit. She was definitely stubborn, but she didn't fit with the rest of it. She was definitely sensitive, but she wasn't his description of a compliant child, either. I read this book and knew why. She's a dreamer. Not a "head in the clouds, spacey" kind of dreamer, but an internal perfectionist, sensitive, creative, emotional, compassionate dreamer.
"without nurturing and unconditional support, no personality is more vulnerable to disappointment, despair, or even rage than the dreamer."
"The dreamer may seem tough on the outside, just as the shell of the raw egg resembles that of the cooked egg. But she is deceptively fragile."
"If a parent or teacher is stern, the dreamer will feel that the adult is angry with her. When you make a request or give a command, the dreamer's response is often "Why are you yelling at me?" even though you haven't raised your voice."
"dreamers can put up quite a fight, but they are scarred by criticism and sometimes by correction. The lasers of criticism and constant correction make dreamers fighting mad, but in the end they'll be deeply wounded... For dreamers correction may lead to a deep sense of personal failure."
"For dreamers, a fear of failure can accompany the process of learning, whether or not correction is involved. Thier internal perfectionism interferes with the ability to motivate themselves to work at a task until perfected - they want to do it perfectly, believe that they cannot, and so refuse to do it at all." (the kicking and keeping her little rear out of the water)
"if you use an aggressive parenting style, the dreamer will stubbornly stop all movement in the right direction."
"dreamers are motivated less by the desire for power that by the desire to be liked. When they feel disliked, dreamers are the most reactive of all children... They cannot believe that the disapproval of their behavior does not indicate a deeper level of dispproval from you or the teacher trying to enforce limits."
"they perceive sternness as unfeeling and critical."
"Harshness leads to stubbornness." (this is why Sophie sat at her old babysitter's kitchen table for 2 hours after lunch... she wouldn't let her up until she asked if she could be done. And Sophie wouldn't do it. Yes... 2 hours. She was 4.)
"If you take a powerful, no-nonsense no-discussion approach with her, your dreamer's behavior may deteriorate. Your child may feel she has not only disappointed you but has also caused you to hate her. At least, that is how she tends to feel at the moment." (and this is why Sophie went 2 weeks without saying a single word to her old babysitter... she was convinced that she hated her.)
**** for anyone who may know our old babysitter, I've said before, I don't think she is a bad person, it was just not the right personality mix for Sophie. (Corey feels differently, though.) It wasn't long after I read this book that we pulled her out and started sending her to Jessi. The change in Sophie was instant and obvious to many who knew her. Truly the best thing we ever did for her. Thanks, Jessi. ****

We're all better here now. The kids both spent about an hour in their rooms after we got home. Mommy did some blogging therapy here and realized how everything I did today (being too stern, threatening to take away trips to the water park and beach, critcizing, etc.) did the exact opposite of what I wanted them to do. (That was the second round of disappointment I was feeling at the beginning of this post. Disappointment in myself and how I handled things.)
Lawson got a little mini-lecture, too, but I know that his refusal to cooperate today was based mainly off of hers. He was going to react exactly how she did. He made that choice, though, and he's old enough to make his own choices, so no "Max and Ruby" for him today.
Sophie apologized.
I apologized.
Lots of hugging and making up.
Still disappointed in myself for my failure to make a bad situation better.
No pretending to be a perfect parent here.
No trying to make it look like we have the perfect little life here.
I'm being honest and real.
And this morning was really bad.

Both kids are napping now and Mommy is going to watch something senseless on tv, eat cookie dough and drink a Diet Dr. Pepper. Because that's what all good mommies do, right?
Posted by Amy at 11:05 AM

it's all so hard amy.
that book sounds great.
if i ever decide to read again...i will borrow it.
but i bet i will have to pry it out of your clenched hands. :)

i'm sorry it went so bad.
i have been there.
it is confusing and so frustrating.
but don't think that people are judging. most aren't.
most understand that they don't know what to do with their kids either most of the time.
at least that's what i am thinking.
you are doing a good job.
i rarely feel like i am a doing that great.
just keep swimming...just keep swimming.

how much cookie dough do you have over there?

Amy, I'm not very good at putting my thoughts and feelings into words, but I feel like I should be thanking you for letting me be a part of Sophie and Lawson's life! I love your little people and feel like they are as much mine as they are yours. I have thoroughly enjoyed caring for them over the past year and hope to keep building our friendship. I think you and Corey are awesome parents and are doing a great job! I love you guys! :)

Oh Amy... so sorry to hear about your frustrating day. Hope the cookie dough and DP helped. My sister-in-law swore by this Dobson book when her daughter was little. It helped her tremendously. :) Hugs to you~ Jill

Amy,
I can certainly symphathize. Mommying is the hardest job in the world and the most important. But I know it often leaves me feeling exhausted, frustrated, and dumb. Every mom has her moments, most are good to great and some unfortunatley are not so wonderful. Forgive yourself and forget. I'm sure Sophie has.
Take care of yourself!
Sarah

we've all been there. thanks for your transparency!