Do you remember this? Our lovely desk area that was a complete disaster at the end of my decrapification? The lovely area that I forgot about and was so disappointed when I realized I wasn't done decrapifying?? I took this before picture and said that hopefully it would motivate me and I could show you after pictures in a day or two?? 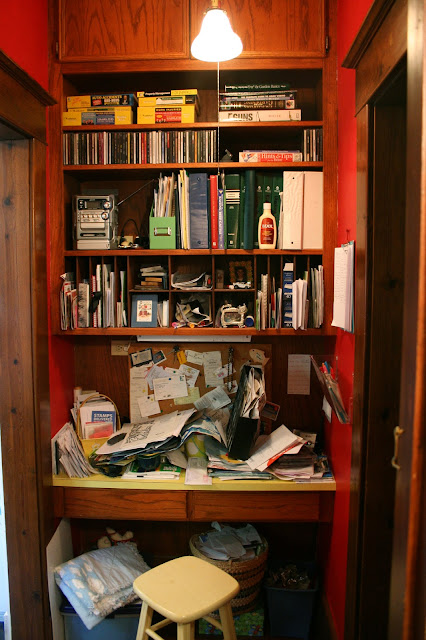 Well it's been a day or two (or 37) and I am finally declaring it done. (It took me awhile to find the motivation and it took a long time to finish. It was a MESS.) But now, look how organized... 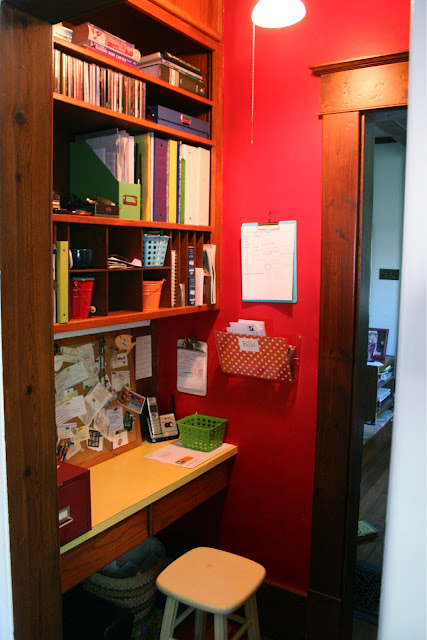 There is still a lot of stuff here. But it is so much more organized. You can actually see the happy yellow  gingham counter top! (I decoupaged it years ago. It was beige. I don't love beige. But I do love yellow!) 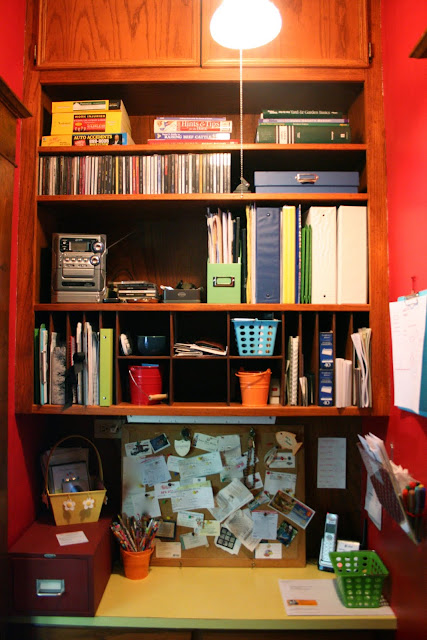 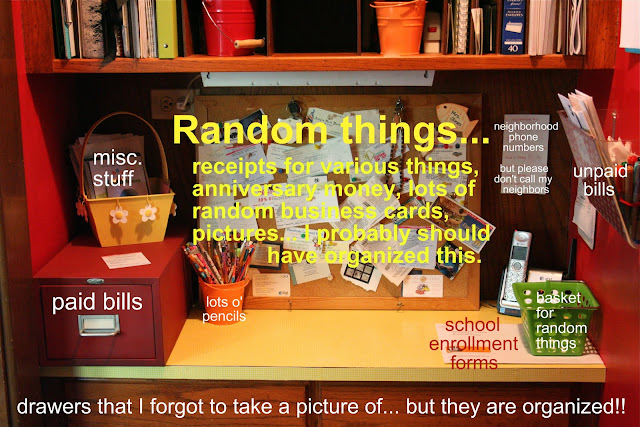 This metal box is making me so happy right now... It was an old army green file drawer that we got from our neighbor's garage sale years ago. 25 cents, maybe? I pulled out some red spray paint and it is now the perfect solution for my stack of paid bills that used to sit and sit and sit until I finally filed them away. Now they can still sit and sit and sit, but you can't see them! 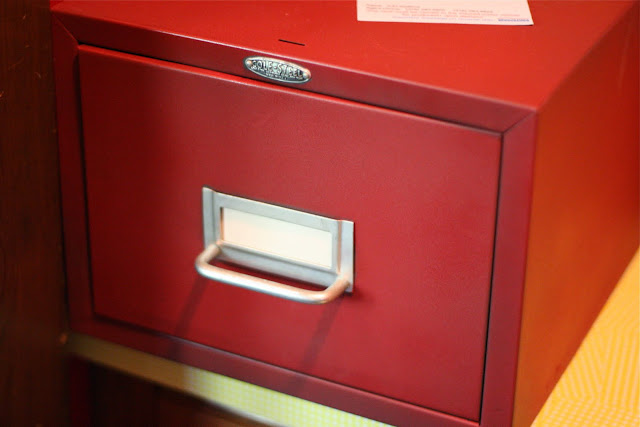 I had bought two little orange buckets and this red one at the thrift store awhile back. I had no idea what I was going to do with them, but they were cute and happy. Now one orange one is full of sticky notes, one is full of pencils (We don't really need an entire bucket of pencils, but there were a million in the drawer and it was impossible to organize. So I just took out all the pencils and stuck them there. It works for now.) The red bucket is full of little lotions and chapstick. (I have a bit of a chapstick obsession.) 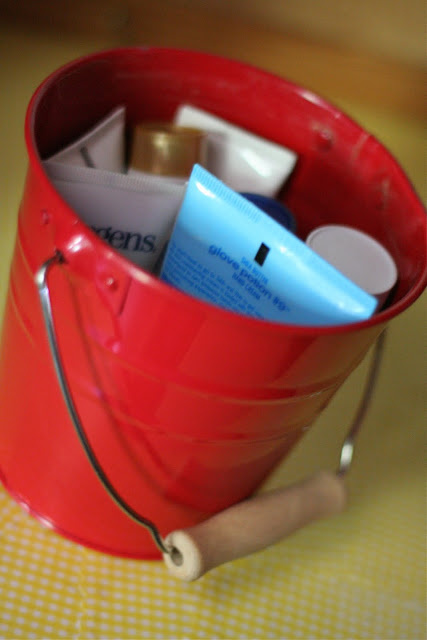 There are so many little cubbies and storage places built in here. Which is great! But it also makes it easy to turn into a cluttered mess. I had a couple little plastic baskets (from Dollar Tree) that work great for those little things you don't know what to do with. The blue one is full of Corey's random things and the green one is going to sit on the desk for random things that need to be put in their place or go somewhere else. (Because I know there are going to be random things.) I also found a little metal box that now holds Corey's phone, pocketknife, MP3 player, watch, etc. Even he thought that was a good idea! =) 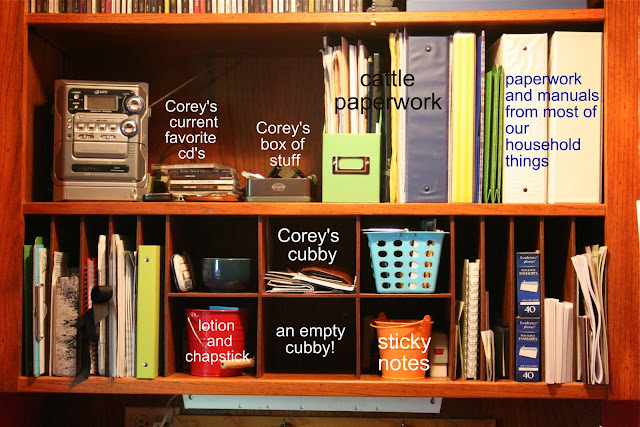 I tried really hard (again) to not buy anything for this project. I wanted to re-use things we already had and find new uses for things. The blue box on the right is the only thing I bought during this organizing project. And I really had no idea what I was going to use it for... I just really liked it. It now holds all the house plans we have torn out and liked for one reason or another. (and there is a BIG cabinet above this behind the doors. There are probably 6 big 3-ring binders up there and LOTS of misc. things. I'm telling you... so much storage in this little area!) 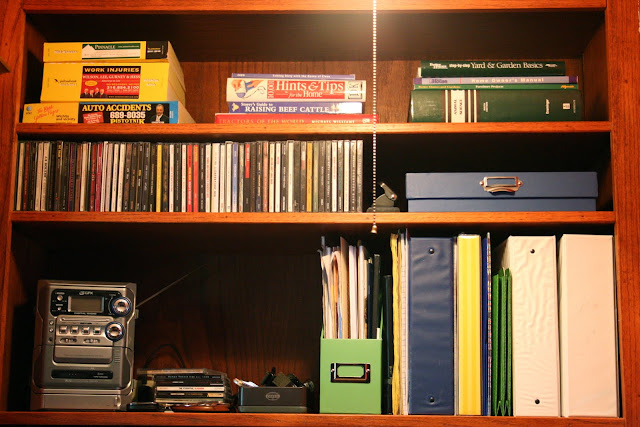 It feels so good to finally have this done! And it just feels so good to have it organized and clean! I needed to look something up on my laptop the other day and I could actually sit down here and have a spot for it! That never would have happened a couple months ago.) Organized is such a happy feeling. 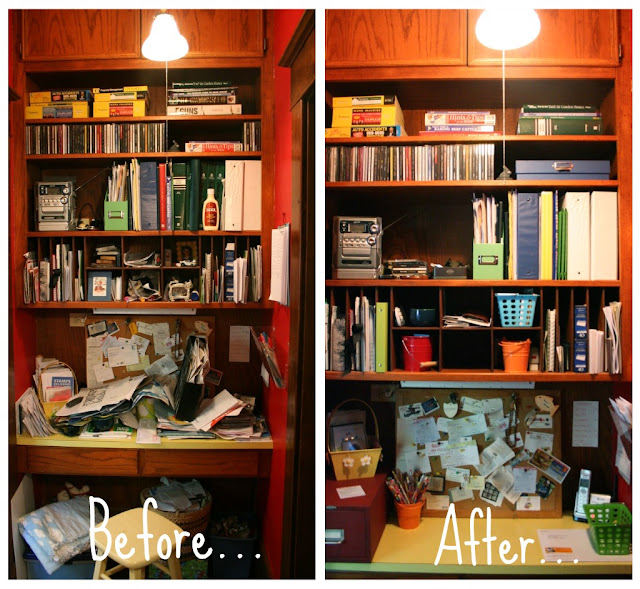 (Sorry about the quality of all these pictures. It's a small area with no natural light, so it's hard to get good pictures!)
Posted by Amy at 3:18 PM

You have great organizing skills! Organization makes me happy, too. :)

One of my favorite little places in your house!

Love it!!! I wish that I had a desk area for that kind of thing. I had to create a place on our counter. Great job Amy!!

Again I am asking you to come to Tn and help me,lol! It looks amazing!

That's awesome and I swear to hog heaven, we are SO much alike cause I love being organized and the feeling is so awesome when it's done and now...you tell me you have a chapstick obsession...so do I my friend, so do I!!! Sooo scary!!!! Great job...now go pour yourself a cold glass of lemonade and admire your handy work! Sorry, had to edit my piece AFTER submitting so that's why I deleted the first one! LOL! :O)