This project was on my summer list!
I first saw the idea on Beki's blog when she linked to this site.
Beki and her kids made their own version earlier this summer that turned out very cool!
But I knew I was going to need a bit more color to make it fit in this house.  :)
I had been keeping a list of rules for awhile. Several of them were copied off of other blogs, people who posted their own family rules. Some were ones I came up with on my own. We all sat down one night and talked about them, and chose ones we thought were important for our family. (Corey was thrilled to be a part of this project.)  Lawson thought we should add the rule: Don't smother the baby.  :)
I had bought a canvas on sale at Michael's this spring. I taped some white paper together to make myself a rough draft... 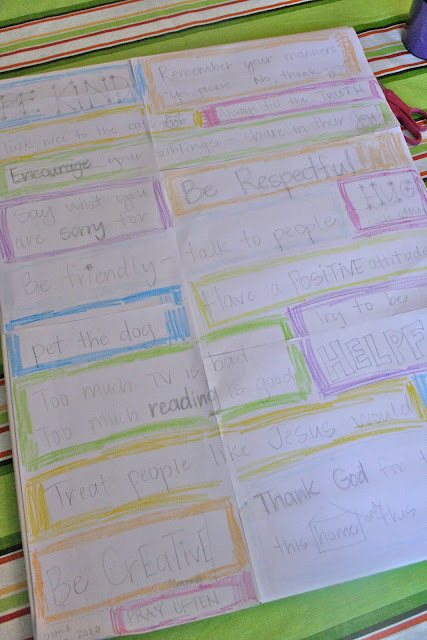 I used my rough draft to pencil lines on the canvas. I wanted the kids to be involved in the painting, but I also wanted it to look neat. So I did some outlining for each of the boxes... 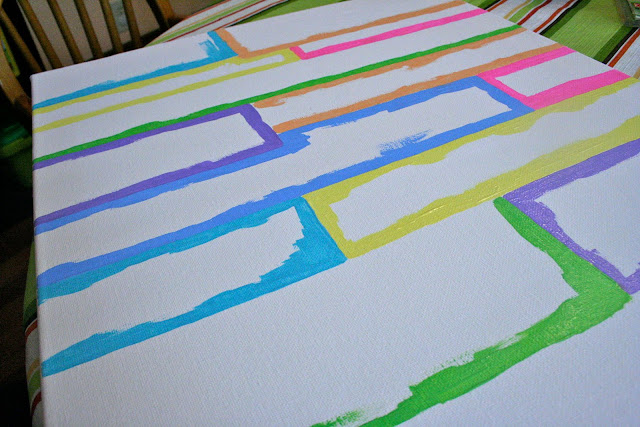 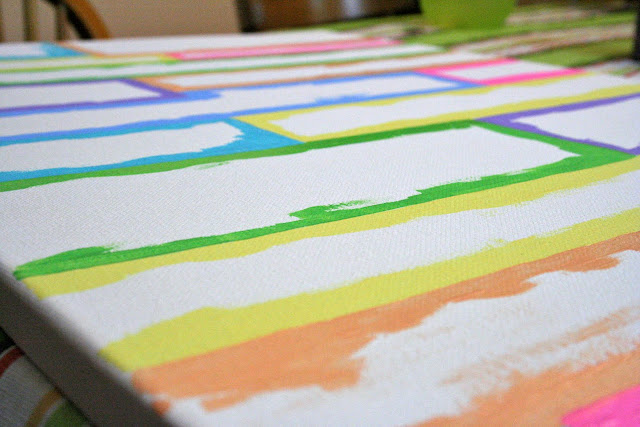 Then my happy helpers went to work... 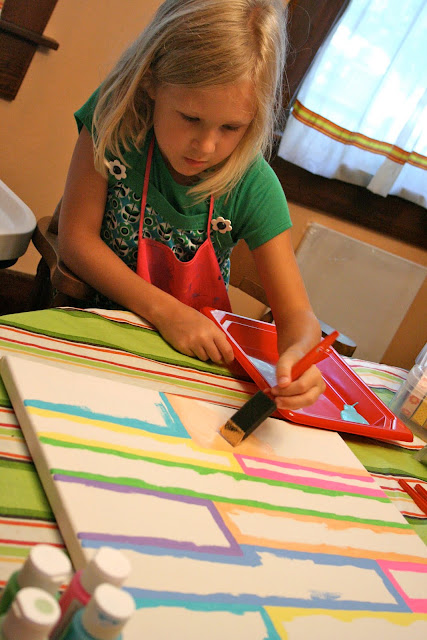 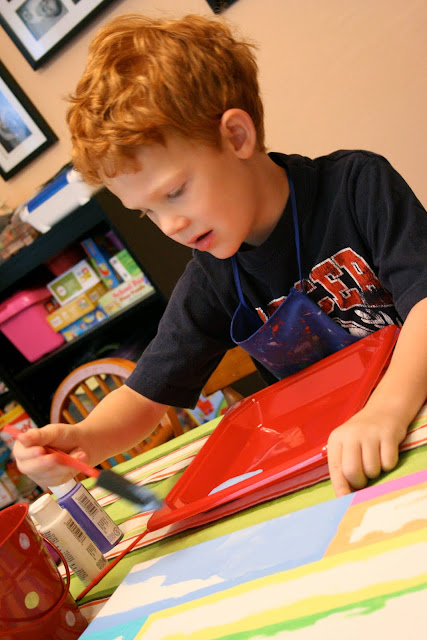 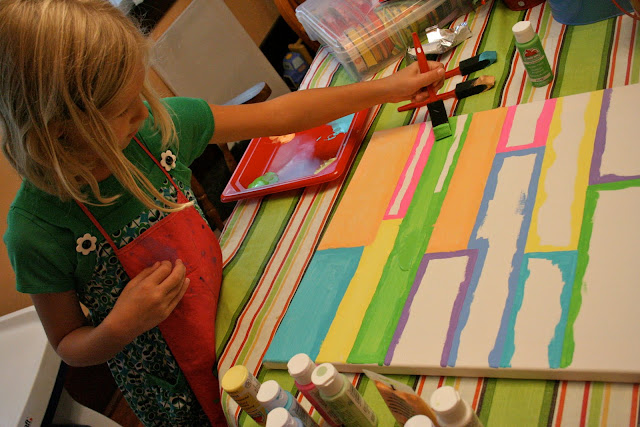 I let them do it on their own for the most part. I may have said often, "Slow down... take your time... go slow... just go in one direction... use long strokes like this... go slow... go slow..." But they did do it all on their own. (And I went back later after it dried and touched up a few areas) 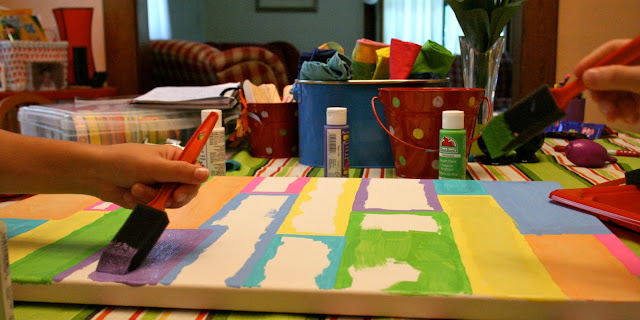 I even had a happy helper that offered to wash out all the brushes... 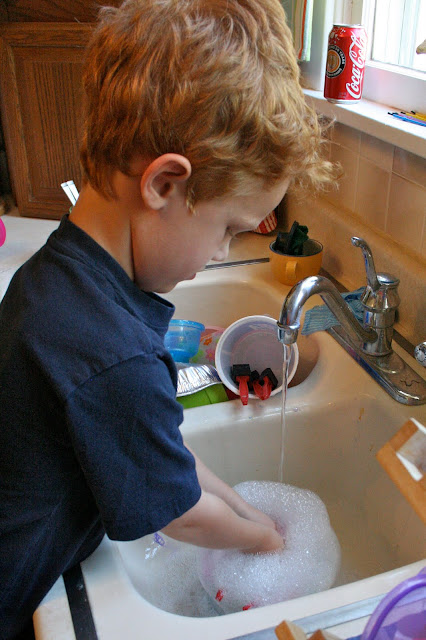 The next night as the kids were finishing supper (they are the world's slowest eaters sometimes, I swear!) I sat at the other end of the table with a couple black paint pens. I had a fine point one and a medium point one. I tried to make my writing look different, just to give it some character. (But my writing pretty much looks the same everywhere.) All the writing took me about 20 minutes. (Except the "Be Creative." I did that one after bedtime. It took a little longer!) 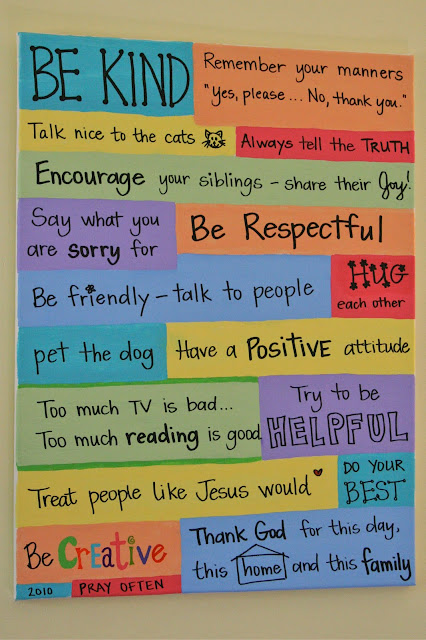 For the most part, I am loving how it turned out!!
It is hanging in our toy room/breakfast nook, right above the hooks for coats and backpacks.
We have already referred to it several times in the past few days.
It's a good reminder of things that are important to us... and it's just happy to look at!  :)
Posted by Amy at 6:00 AM

that turned out sooo cute!!!
i think your writing looks different!
i love the "be nice to the cats" now you just need to teach marley how to read. :)

Really like it! Good idea, i'll have to remember this for when Landrey is a little older or I can make one for my hubby--ha ha!!

Your so creative and I have to admit that I enjoy copying you.

i love it! i've seen them so often...and just love them all!

this looks great, Amy! I know what our next family project will be!!!

very nice could you make me one then i would fill in the nice things to do for jim and i(: blessings,
lindalou

Love this idea! Thanks for sharing!

This turned out sooo good!!