We took the kids to our favorite little hole in the wall diner tonight.
Lawson had his 3 year check up (he weighs exactly 5 pounds less than Sophie does.)
Ever since I told him about his appointment, he had been asking if he was going to get a shot.
He wanted one!
Seriously.
I would ask, "Is it going to hurt?" Yes. "Are you going to cry?" Yes. "But you want to get shot?" Yes.
Strange, I know.

He did get a shot. 2 of them.
Sophie did, too. Poor thing. It wasn't even her appointment! I just brought her along to stand on the scale first so that Lawson would do it, too. (Ever since his very first dr. appt. he has freaked out when they weigh him. Screaming. Crying. Clinging to me. To weigh him. Even when they switched him off the little baby scale and just wanted him to stand on the regular scale. He still screams. But he'll also do anything that Sophie does... so we bring her along to all his appointments now.)

So both kids got 2 shots and we had to go to the lab to get blood drawn! (We wanted to get them tested for lead since our house is over 100 years old and Corey has scraped a gazillion strips of lead paint off the house over the last 2 years.) So the doctor gave directions for them both to get their fingers pricked and blood taken that way. The lab lady wasn't crazy about this, but figured she had to follow the doctors orders. So again, poor Sophie... she's never going to come to one of Lawson's appointments again has to go first this time. She did so great. Didn't even make a peep when the lady stuck her finger and squeezed it forever, trying to get out all the little drops of blood. So great.

Then it was Lawson's turn.
Now he does get excited about getting shots, for some weird reason, but when the time does come to actually get them, he still freaks out and cries. So he's not at all excited about the thought of this lady poking his finger. He's getting a little hysterical on me and the lady says that there is no way he's going to sit still for this finger prick/squeezing out a drop at a time. So she suggests we just lay him down, hold him down, find a vein and just draw it out that way. Fill up the whole tube in no time. So we did. It wasn't easy, but it was much faster than the finger prick, and once he saw his sparkly band-aid and got to pick out a sticker he was pretty much okay with the whole thing.

But now you need to feel sorry for Sophie again.
Her blood sample clotted too fast (or something like that... this is one reason the lab lady said she doesn't like doing the finger pricks) and so they were going to have to do the same thing to her now. After she just sat for 5 minutes and let them squeeze blood out of her finger! And still... not her appointment!

(But I really was trying to help her out... she needed 5 shots before kindergarten in the fall. I thought getting 2 and then 3 sounded better than getting 5 all at once. And the chicken pox has been going around. Pretty sure we don't want that. So I did have good motives.)


So after all this drama, we rewarded out little troopers with supper at their favorite restuarant. It's just a little locally owned place. Sports memorabilia everywhere. Baseball and football cards under the glass on the tables. 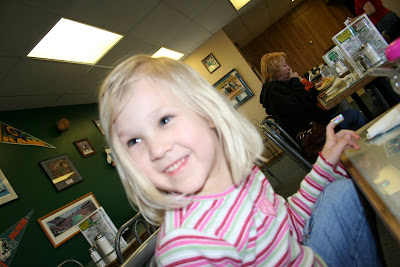 (See the pretty sparkly band-aid on her finger?!) 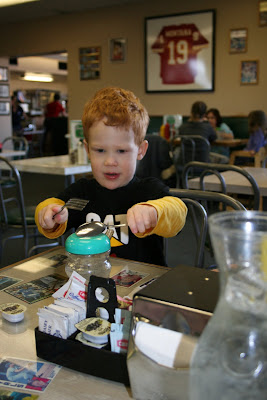 And the kids get those cool cups with the straw built right in.
(Except Lawson always cries, because they always bring Sophie one with a pink lid and he of course wants the one with the pink lid. Corey is so proud.) 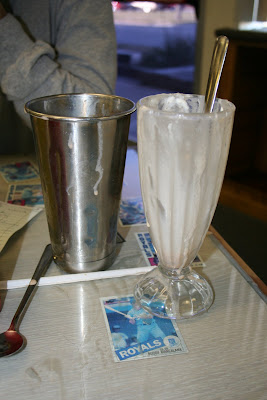 And for an extra treat... a chocolate malt!
I didn't think about taking the picture when she first brought it.
It looked all pretty... whipped cream on top... you'll just have to imagine it. 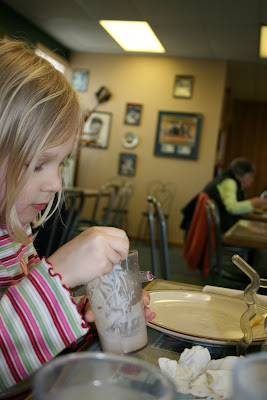 We love Curtis C's!
Such good little troopers today.
"We like shots, because shots keep you healthy!" (That's our motto, anyway!)
Posted by Amy at 10:13 PM