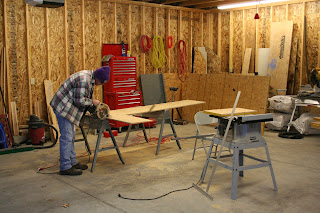 Corey's been working on some storage cubes that we're going to tuck under the rafters in the garage loft. Then when we finally get around to sheetrocking up there, we'll have some built in storage nooks.

I called his cell phone tonight to tell him supper was ready (because I was too lazy to walk outside... and it was really cold) He answered his phone, "Man cave. This is Corey." :) 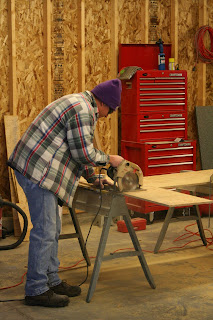 And every time he comes inside he says that if he just had heat and a toilet out there, he would never come inside. Heat will be added at some point. He's out of luck with the toilet, though.