It's probably my own fault. I really should have known better. After the marker incident Friday night... I should have been more careful.

Corey was gone Saturday morning and I was vacuuming. The kids were coloring (with crayons) and playing together. This construction project has tracked in an unbelievable amount of dirt and sand and it seemed like the whole downstairs was filthy! I was spending extra time getting cat hair off of curtains, pillows, etc. Vacuuming... checking in on the kids... more vacuuming... more checking in. When I moved to the toy room where the kids had been playing, they decided to move upstairs. It was my last section to clean and I had been working for over an hour. I decided that the upstairs could wait until next weekend. Finally finished and headed upstairs to get the kids for lunch.

About halfway up the stairs I noticed the overwhelming scent of baby powder. I reach the top of the stairs and see this... 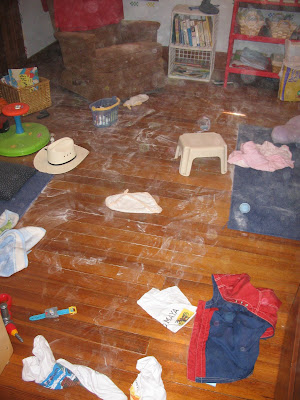 This would be Lawson's room... covered in baby powder. Both kids were right in the middle of it. Sophie in her ballerina outfit, twirling and spinning. Lawson dancing and shaking the powder.


That haze you see? That would be baby powder that has not yet settled. 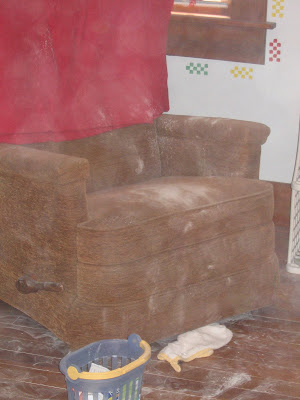 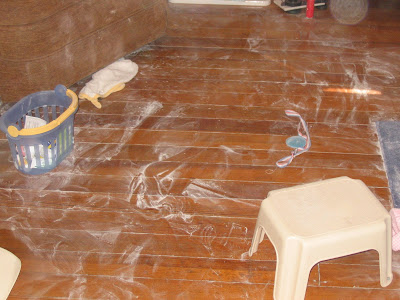 After I snatched away the baby powder and said a few stern words I left to go get the camera. (Because that's what all good mothers would do, right? :) I returned to find them hiding under Lawson's bed. Don't they look sad and sorry that they have made such a mess? 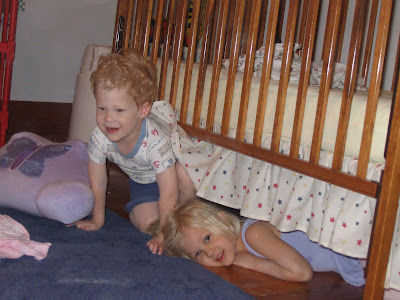 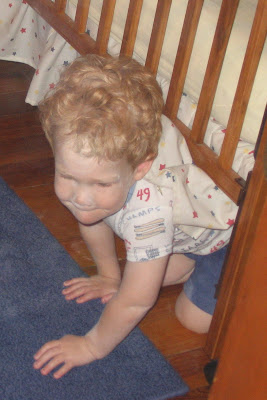 I don't think there will be any unsupervised play at our house for awhile.

It did make me think of the time that Sara and I were baking in the kitchen at her house and decided to put flour on the ceiling fan. More than once. This must be something like her mom felt when she walked in and found us. And we were way older than 4. Sorry about that, Linda. :)
Posted by Amy at 3:58 PM

Oh my word...they did have FUN with powder!!! My girls are 15 months apart and did something similar to this but I dont think it looked that bad..lol
Cracking up at sweet Lawsons hair..lol..now you know what he will look like at 50..lol
And, NO they do not look scared...lol

I love hearing stories like that...It's good to know I'm not the only mother with chaos in my life sometimes!

Your big sister did that one day instead of a nap. A container of powder holds alot!!!!

oh amy!
that is hysterical.