Sophie really wanted to go to the high school football game last night. Corey and I were both way too tired. We talked her out of it by offering going out to eat, getting a movie and snuggling together on the couch with ice cream.

We hadn't been to the Burger King here in town and the kids were so excited to check out the play area. Well, the play area here is like three times the size of the one at Grandma and Grandpa's Burger King. Three little net areas to climb through to even get inside it. Lawson mananged the first two, but there was no way his little legs could swing up over the third one. There was also no way that either Corey or I could get in to help him. And there was no way Sophie was going to be brave enough to venture up there without Lawson. There were two older boys (6 and 9) already there who both came rushing over to offer advice and words of encouragement. "You can do it! I was scared at first, too. Just put your leg up here." Once I gave the older boy permission, he pulled Lawson up through that third opening so that they could finally get to all the fun stuff. They showed both kids all the special areas, went with them down the big slide and stayed right with them every trip up so that they could help get Lawson up there. The kids had the best time and these older boys were so kind to them. After their last trip through Daniel left with his mom to drive back to Hesston and Vance got in his dad's semi truck and headed off. What a disappointment my kids would have had if it weren't for these two boys.

We drove past the football game right at halftime and pulled over, rolled down the windows, listened to the band and watched the cheerleaders. Visited the video store to get VeggieTales for Lawson and Hello Kitty for Sophie. Home for jammies, ice cream and snuggling on the couch.

Such a good night. 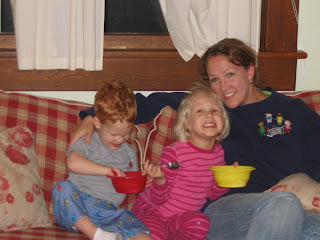 Simple things can be so fun. How nice of those older boys to be so good with the kids. Glad you had a good family night.