Thank you, Julie, for sharing this super cute idea!
Lawson and I made these for kindergarten snacks last week.
I was in charge of the Nutella and he was in charge of unwrapping the Hershey's Kisses and putting the vanilla wafers on top.
He was pretty proud of himself, let me tell you! 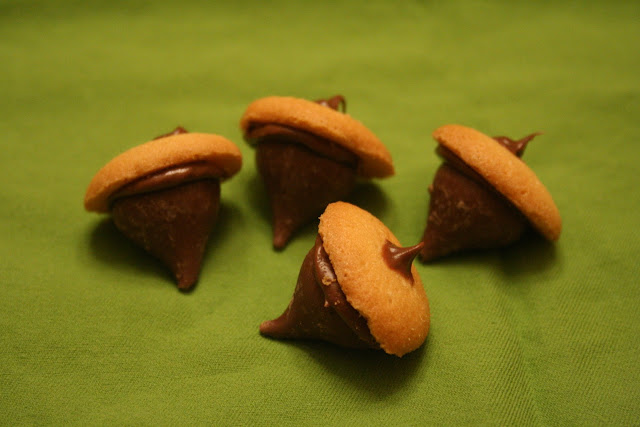 His teacher told me later that Lawson was sharing with all his friends the steps for making acorns.
First, mommy puts Nutella on the Pershey Kiss (it's been a P since the kids were tiny. Probably one of those things I've never corrected because I think it's cute!) Then you put the vanilla wafer on top in the middle....
And oh, those crafty teachers... smart Mrs. Claassen turned it into a lesson on sequencing. (which they had been studying in math) She said the kids were asking Lawson questions and he was talking like he was hosting his own little cooking show.
Love that kid.
Posted by Amy at 9:32 PM

Nutella! You've got to love a treat with Nutella. MK will love this idea (she's into squirrels). Are those the mini Nilla Wafers?

Yep, you've gotta use the mini ones. Regular ones are too big. If you guys eat Nutella, remind me to tell you about chocolate puffs! They are the yummiest!!

These are darling! Thank you for sharing. I love picturing Lawson acting as a cooking show host too. :)

Those are ADORABLE!
I was afraid that you were going to have acorns on your table, from outside, and I was going to have to tell you,"They have worms!" I think you're safe with those, though. :)

Funny, I was just looking for that "recipe" last night to do with my nephew when he comes next week. Can't wait to make my own.

I had no idea they had mini nilla wafers. I'll have to look for them up here. We are HUGE Nutella fans, try spreading it on some pound cake, it's the BEST! Please tell us about the chocolate puffs!

and my girls say:
Burger Kinger and
old McDonald's

both of which I refuse to correct ;-)

This looks like fun! I think we'll add them to our Thanksgiving table...along with the oreo turkeys! =)

By the way, your email the other day cracked me up. I didn't get a chance to reply, but I did choke on my coffee when I read it. ;-) You're funny.

those are awesome! Im gonna so make them!