I don't know that I've ever seen a real raccoon. In the wild. Just out and about, walking around. 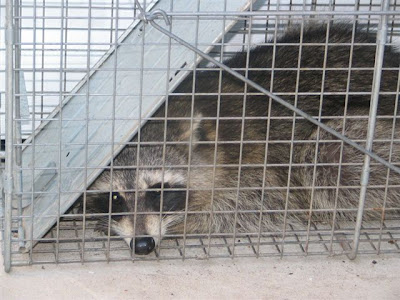 Jessi needed this week off, so Sophie and Lawson have been staying with some new friends. They have been having so much fun playing with Ezra and Jobe (and Brooklyn and Jake when they get home from school). But this has been some of the real excitement... 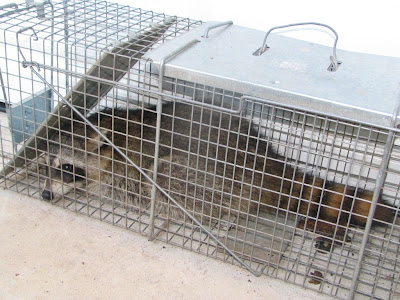 The first day we saw him, he was up in their garage rafters. Just hanging out, sleeping, a couple of his paws hanging over the edge. He woke up and looked at us all, but didn't seem at all concerned.

We saw him again this morning, just sitting in the grass and then scampering through the yard. He headed straight for their garage, in that funny little run/walk they do. Straight for the cat food. Gina yelled at him and tried to shoo him out of the garage, but again, he didn't seem the least bit concerned.

They had put out a trap and about an hour later, Gina sent me these pictures.
Doesn't he look sweet?
Just like Chester from "The Kissing Hand." 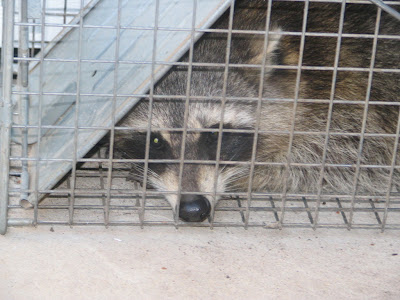 A quick trip to the country was added to their morning schedule.
And now Mr. Raccoon has a new home.
Posted by Amy at 10:30 PM

I thought of the Kissing Hand book when I saw his little fact too! How cute!

i walked out the other night to walk the dog at midnight...2 raccoons on the tree right by the door. yuck. they just stared at me. and went a slight bit higher with waffle there.
i just always imagine them jumping on me or something!