We've had one more big change here that I realized I never shared about.
Corey has a different job. A new/old job.
Two weeks ago he started back at his old job for the City Parks Department.
He had been at his new job (a private engineering firm, doing materials testing) for 7 weeks.
There were several reasons that led up to the change, and we talked about it for quite awhile before we actually made a decision. When we compared the pros and cons, it was actually a pretty easy choice.

Yes, the hour drive (one way) is a bit long, but it could be worse. (He was driving 30 minutes, one way for the engineering job, so 30 minutes more didn't seem like that big of a deal to him). He knows the people, he knows what he's doing and he's really good at it. I'm actually a bit jealous. Jealous of the fact that he's back in his work comfort zone (and I'm still so far away from feeling like I have a comfort zone) and he's back in the little town that still feels like home to me. I wouldn't want to trade his commute for my little 7 minute commute, but still... I am a bit jealous. I miss my comfort zone. (I'm a bit jealous of his quiet drive, though. My drive is never quiet.)

We were really spoiled by the City's insurance plan. And the school district plan just couldn't compare. The $900 they were taking out of my paycheck each month was pretty staggering. (Like $800 less per month than what I had been making). And when your dreams include things like building a house, $800/month is a pretty significant amount.

So even when we figure in the cost of gas, the cost of buying a new (to us) vehicle (anyone have a Honda or Toyota for sale?!), we still come out ahead.

Corey doesn't love the drive each day, but he doesn't hate it. He really likes the people he works with (and they have been amazing to him!) He spent the last two weeks leaving at 4:45 am so that he could be there by 6:00 am. This week, they switch back to 8 hour days, 5 days/week. So he won't have to be there until 7:00 and he'll get off at 3:30. Chances are, he's going to beat the kids and I home most days. They were thrilled to have him back and the engineering firm here wanted to counter offer to try and keep him. (They couldn't quite counter with $800/month, though.) They were sad to see him go, but he left on good terms. He didn't earn the title of "Hardest working guy I know" for nothing.

He really wants that farmhouse. And he's willing to do whatever it takes to get it. And I love him for it.
I try not to get too paranoid about him driving 70 miles on a 2 lane highway everyday. (But I do make him text me when he gets there.) And even though it didn't make our list of "pros," him being able to stop at our favorite little local donut shop and bring home a box of peanut butter twists was a happy little surprise last week. =) 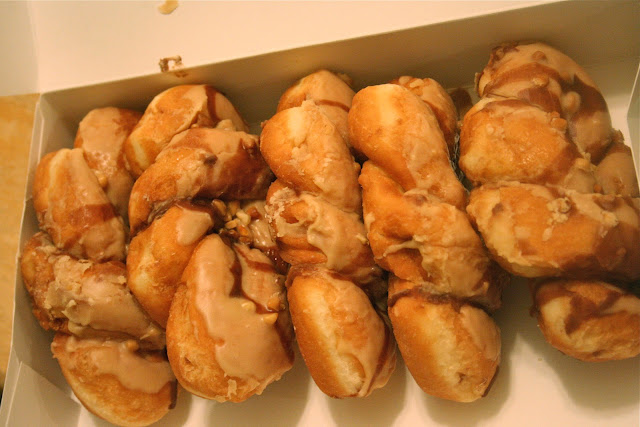 And seriously... we are in the market for a nice little fuel efficient car. Anyone nearby who has one... we'd love to hear about it! There might even be a peanut butter donut in it for you. =)
Posted by Amy at 10:25 PM

So glad to have Corey back in town. I just wish you could come with him everyday :)

So he CAN commute Gretchen to daycare!!! ;) We sure do miss her!

That's terrific, gotta go where you can provide for your family and certainly be happy. I'm in the process of finding something new and it truly isn't easy. Hope he has safe travels back and forth and many wonderful blessings bestowed on your family through all of these changes.

Oh I feel like I have been so out of the loop - congrats on all of these changes! Funny where life takes us -when all of the little things don't seem quite right, but the big picture keeps you grounded. Stay focused on the big picture and everything will fall into place :)

I saw Corey the other day and wondered why...now I know! It's good that part of you is still "here". You are missed by many folks (me included!). By the way, your baby will always be your "baby", even when she's 15 like mine will be in a few days! Such precious kiddos...and how is your black, furry kiddo? I miss Marley, too. Hope all is better than well for you guys!