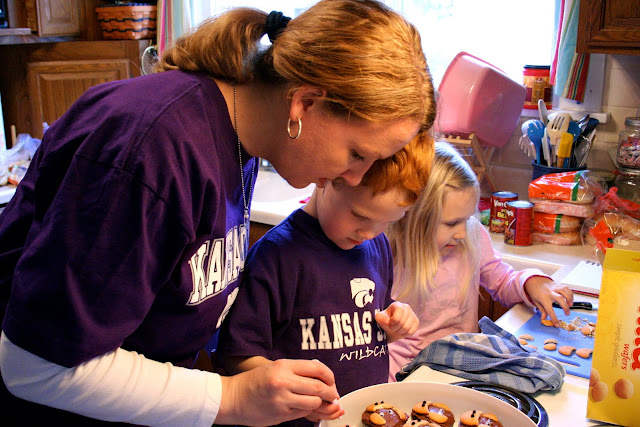 Lawson loved his monkey cupcakes! Thanks for the great idea, Holly! (We're taking them to pre-school tomorrow, too! But without google eyes... just frosting for eyes at pre-school.) 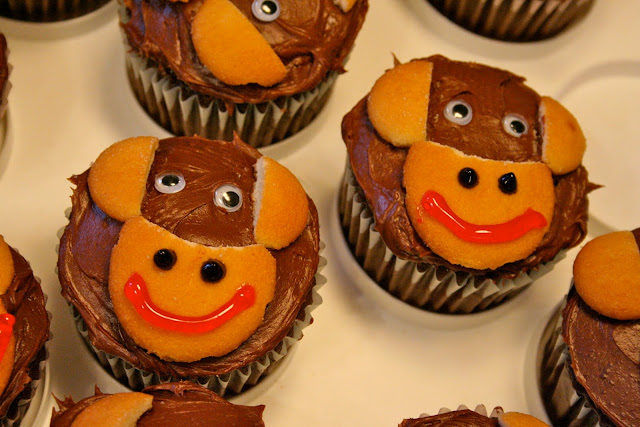 Always so excited to open gifts! Seriously love his enthusiasm! 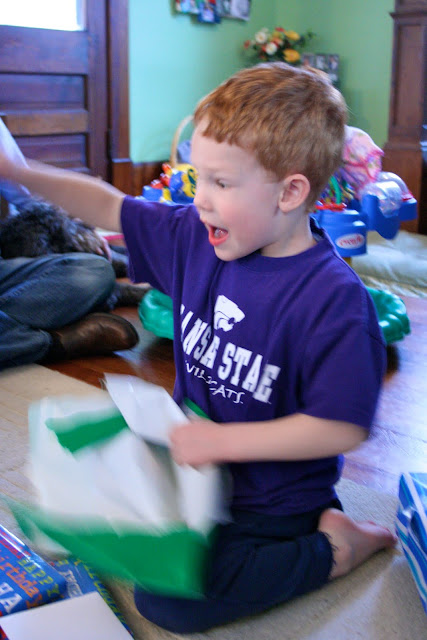 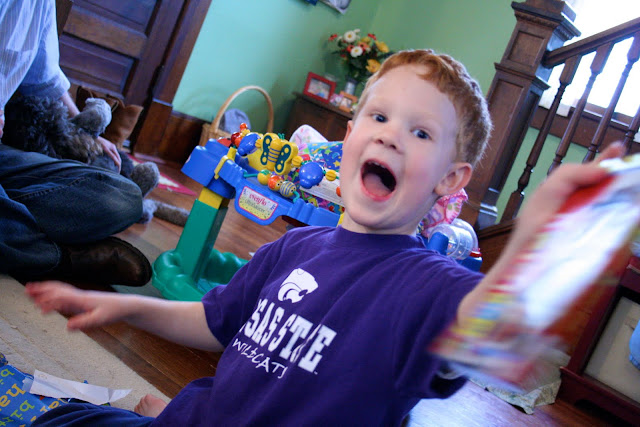 He even gets excited about simple presents like this (his gift from Sophie.) He's always wanting to borrow Corey's water bottle to spray his hair. He was thrilled to get his own! 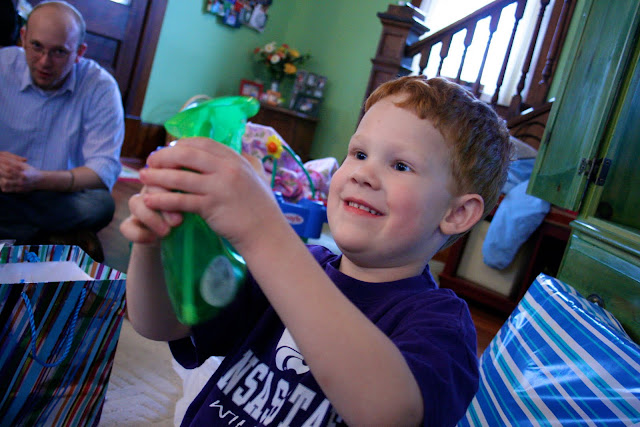 One of his favorite movies. I think he mainly likes the cows. His favorite part is when they cross the river  and Billy Crystal goes in the water after Norman. We've seen it on TV a couple times and used to have it saved on the DVR. It got erased and he asks me to check every week to see if it's on. (The only problem is that the ones we've seen on TV are edited... little bit of language in the real one. Hmmm... not sure how to handle that just yet.) 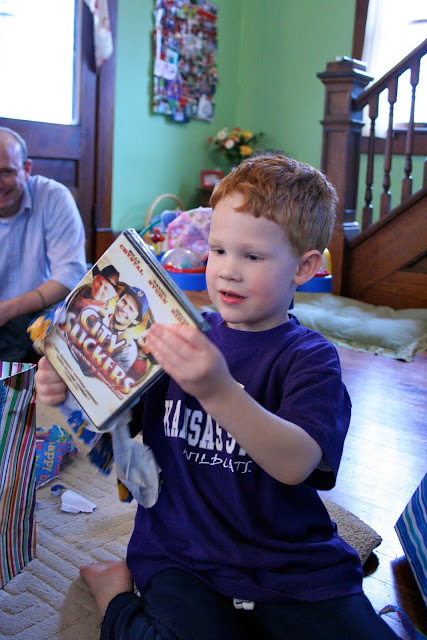 He opened this gift last. With his eyes closed. He was so excited! I'm not sure if he knew what it was... or if it was just because it was so big. Another Monster Tetherball! (Marley popped a hole in the one he got for his birthday last year.) 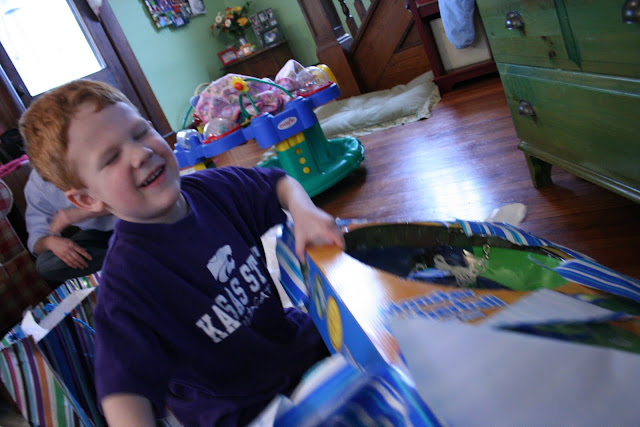 This turned out to be the favorite gift... 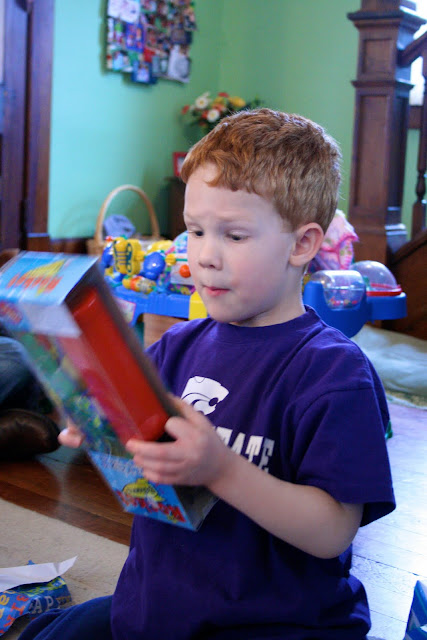 Long, skinny balloons that you blow up with a pump... then let them go and they fly all crazy around the room! So much fun! My mother-in-law and I actually both bought him one... which works out pretty well because Sophie loves it, too! (Corey... not so much.) 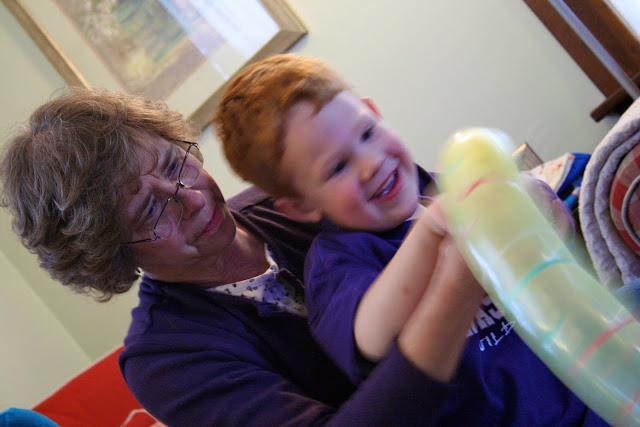 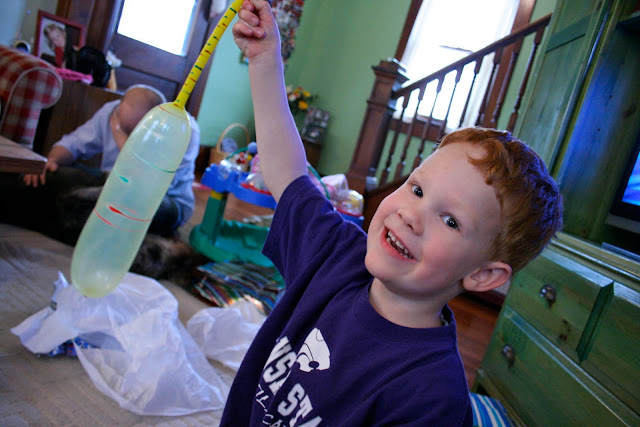 I can't believe my little man is 5 years old. 5 sounds so big. 4 still sounds little.
But he's not little anymore... 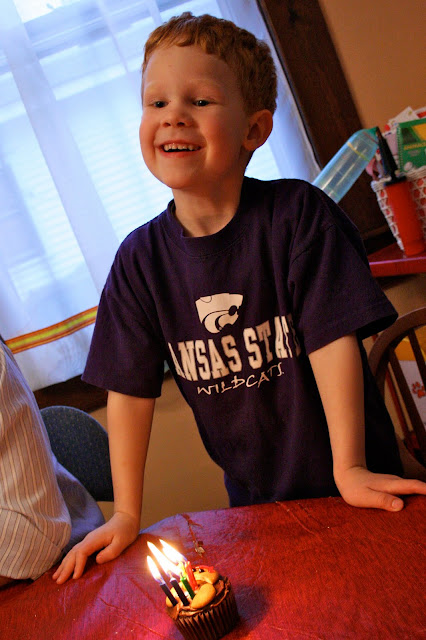 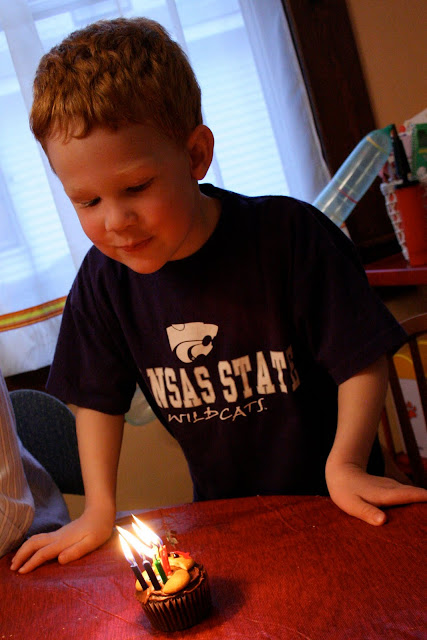 Happy Birthday to your little man! Your cupcakes are adorable!
That is funny about the water bottle...my kids love them too (we use them in the morning-rooster hair) and could spend hours just squirting one another. Or themselves. Or the floor. So silly.
We just let our kids watch The Sandlot (they are 7 and 9 and I have to admit the 2 yr old was there, too) and there is some language in that movie. We just told them that there were words that they were not allowed to say and they got it. I have a sister-in-law who will also tell her kids (same ages as mine, although they haven't seen any movies with language, but maybe potty talk or something) that if they are not mature enough to watch and refrain from repeating, then they are not mature enough to watch. They usually live up to that. :) I love edited for TV movies! They take out all the stuff that makes me uncomfortable! (I grew up Baptist... :) )

Looking at your pictures... makes me want to be adopted by your family. Looks like 24/7 fun!

hmmm....so why doesn't he like my water bottle? :) those cupcakes are adorable!!!