Corey had to go play farmer this weekend. (Which isn't very fun with lots and lots of snow, dead batteries and frozen well pipes, apparently.) He was leaving around noon on Friday and wouldn't be back until Sunday later afternoon. At the last minute we ended up sending Sophie with him and he dropped her off at my parent's house.
She was thrilled and I managed to put a positive spin on it so Lawson didn't feel left out that he didn't get to go. (He's pretty easy, actually. I only had to promise we would make cookies.) Sophie is having a blast and is getting thoroughly spoiled by Grandma and Grandpa, I'm sure. And this little man and I are having lots of fun together... 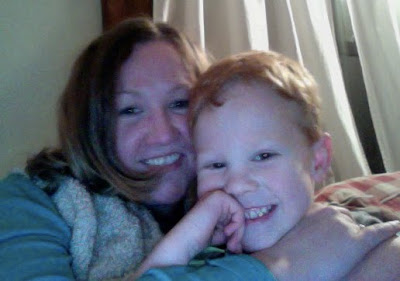 We've baked cookies, watched movies, read books, gone to McDonalds and have done lots of snuggling. He has done a great job of playing alone and entertaining himself, too. (Which is nice, because Gretchen is here, too.) Part of that is because I have let him play in Sophie's room with some of her new toys. ("I won't tell Sophie. Ok, mommy?")
What's really amazing to me is how quiet it seems with only two kids.
How relaxing.
Funny how quickly things change.
Posted by Amy at 10:56 PM