Today was picture day at school. The posed, full body shot ones.
I had a cute green dress picked out for Sophie to wear.
Last night I saw the little line on the bottom of the picture note that said, "Avoid wearing green."
So we came up with a Plan B for Sophie. (purple)
But somehow that little tidbit (avoid wearing green) slipped my mind 20 minutes later when we were picking out Lawson's shirt. He chose a bright green button up shirt that he looks adorable in.
But it happened to be the exact same shade of green as the background.
Awesome.
I'm thinking that you'll see jeans and a little floating head in his picture.
He wasn't crazy about the thought of wearing a button up shirt all day, so I told him he could take the green shirt off after pictures and just wear the t-shirt. When I saw him later at recess, this is what he looked like... (minus the gum stretched across his face...) 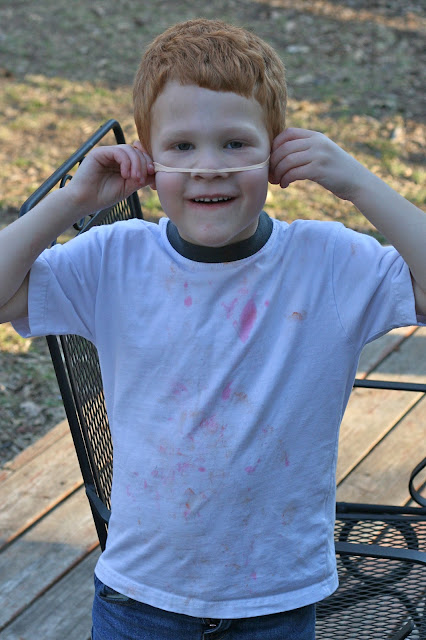 I have no idea what happened to this kid at lunch or how he managed to end up looking like this.
I guess I should be thankful they took pictures before lunch.
Posted by Amy at 9:16 PM

too funny!
can't wait to see that picture!

he did look adorable in the little green shirt!

Isn't that the truth! We never notice how dirty our kids look till they are out in public. :)

Come see your life in my crystal glass
Twenty-five cents is all you pay.
Let me look into your past
Here's what you had for lunch today:
Tuna salad and mashed potatoes,
Green pea soup and apple juice,
Collard greens and stewed tomatoes,
Chocolate mile and lemon mousse.
You admit I've told it all?
Well, I know it, I confess,
Not by looking in my ball,
But just by looking at your dress.


or shirt...whatever ;-)
read that to my girls yesterday and it immediately popped into my head before even reading the post you wrote..hee hee...

This made me laugh out loud! I can totally relate. We have our full body pics next week. There will be lots of grumbling about wearing a "nice shirt":)i.e any shirt w/ a collar or buttons is considered nice in his book!

It's a good thing you have great looking kids - Lawson's cute little floating head will be adorable! I love the gum across the face. It really adds a lot to his after pic "look".

That is too funny! My eight year old son comes home from school like that every day...he wears a uniform! It's not always lunch either. I say, if they use non-washable materials then he will wear shirts with paint stains! ha.