** I would love to know the significance of your kids' names...
Sophie Nicole... I've liked the name Sophie since high school. But I didn't want Sophia. Just Sophie. I had several people tell me that Sophia would be better, because when she's older, she wouldn't want to be called Sophie. But then I had a professor in college... tall, beautiful, sophisticated... named Sophie. And I knew it would be okay. =)   Nicole is my middle name. 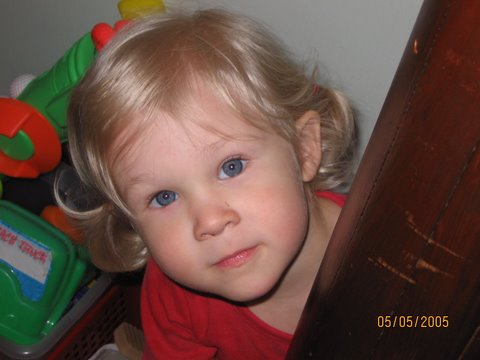 Lawson Bernn... my maiden name was Law and we just kind of made it up. (I've learned of a few other Lawson's since then, but I honestly had never heard it as a first name before.) Corey's dad was named Bernnie. He passed away very unexpectedly 10 years ago (a year before Sophie was born) and we wanted to honor him. So Lawson is named after both his grandpas. Gretchen Jane... I don't even remember what made me suggest it, but I threw it out there one night when Corey and I were talking about baby names and we both liked it right away. And it was funny... after we decided it, I started seeing/hearing the name everywhere. On the radio, on tv, Facebook, letters from the hospital. Several people at school were trying to guess her name (I only told one friend the name with each baby) and I would tell them that they knew the name, they've heard it, it's not an "unusual" name, but that I didn't know anyone with that name. We love it. It's the perfect name for her. (and we never could decide on a boy name...)  Jane is after my mom. We decided on it before we knew her first name. 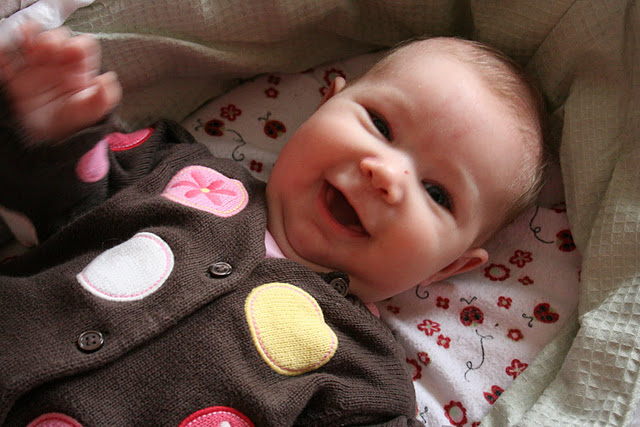 Random sidenote: There is a Jones family tradition... ALL of the Jones... in-laws, cousins, aunts, uncles... everyone who didn't marry in... has a middle name that starts with an L. Everyone except my children. I guess I'm a bit of a rebel. Or a black sheep in the family. I didn't intend to buck the tradition... it just kind of happened. We didn't know if Sophie was going to be a boy or a girl, but I had known for years that my daughter was going to have my middle name. I had just always wanted that. So we decided that it our baby was a girl, she would have my middle name and if it was a boy, we would do an L middle name. We knew that Lawson was going to be a boy and all along, we were going to use Lawson as his middle name. Two weeks before he was due, I suggested using Lawson as a first name and to make the middle name after Corey's dad. And obviously Gretchen isn't an L, either. So my kids ruined the tradition. Luckily, the Jones all still seem to like us. =)


** I have 2 kids right now... i haven't ruled out a third (my husband would love a boy - we have 2 girls now)... what are your thoughts on having 3 kids? (i'm barely staying afloat with 2 (10 months & 3) is it overwhelming? do you find it totally exhausting?
I am definitely overwhelmed and exhausted sometimes. (Maybe a lot of the time) But at this point, I think that has more to do with the fact that I work full time. I've shared before that Gretchen was a surprise. We were still debating on whether we wanted to stop at 2 or try for 3 and God decided for us. I am so glad He did. I truly cannot imagine our life without her. I do like the space between them, though. Sophie and Lawson are just 2 1/2 years apart. When Gretchen was born, Sophie had just turned 7 and Lawson was 4 1/2 years old. That was so different and it has been so much fun to have "big kids" and a baby. When Lawson was 2 1/2, I couldn't imagine the thought of having another at that point. Imagine that... God knew what would be just perfect for us. =) 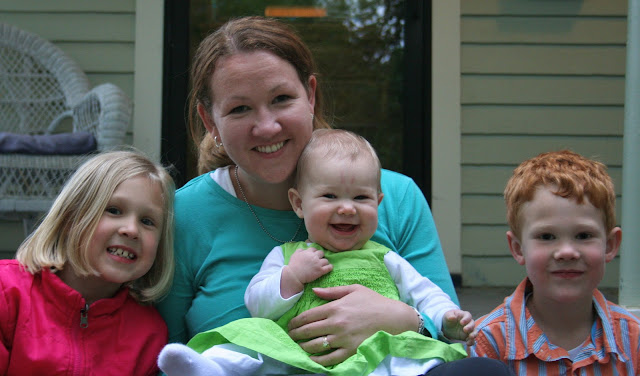 ** What type of discipline do you practice? ex: time out? taking things away? what works for your kids?
We use time-out... we take things away (the Wii is Lawson's big motivator right now, Sophie's would probably be TV)... we do spank, but we try to save that for more serious things. We also do vinegar in their mouths when they are talking rudely or disrespectfully to us. Early bedtimes, too.


I've been to so many different discipline trainings with school that I probably use a variety of different types. I really like Jim Fay and Love and Logic, Becky Bailey's Conscious Discipline is good, too. And Larry and Angela Thompson's Effective Discipline is what our school is using now. So I probably use some of all of these with my own kids. The things that I preach at share with Corey are: give them choices when you can (but make sure that you are okay with either choice), tell them WHY they should or shouldn't do something... this is a big one, I think. Too often we just want kids to do what we say, when we say it. Taking an extra minute or two to explain to them why you want them to do something can make a big difference. Consistency is huge and modeling is so important. They are always watching... whether you want them to or not. Sophie's sarcasm and eye-rolling drive me crazy, but I also know exactly who she learned it from. (Darn it.)

** We are overwhelmed with toys...how do you keep your house "tidy?" do you donate? do you sell them? give them away?
My house? Tidy? Um... yeah. That doesn't really describe my house that often.


So I honestly typed that sentence and then just got up, got my camera and took a few pictures. This is what my house looks like right. this. moment. 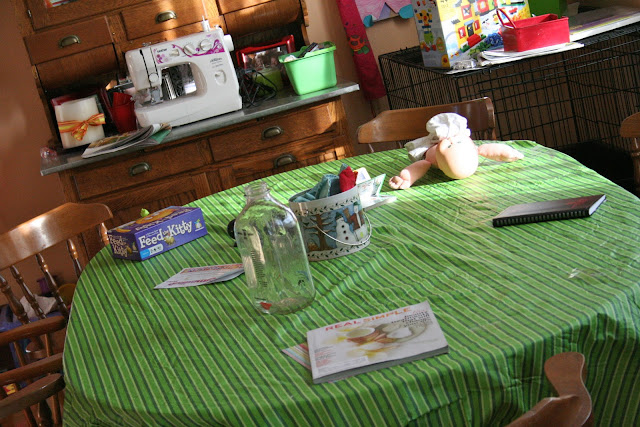 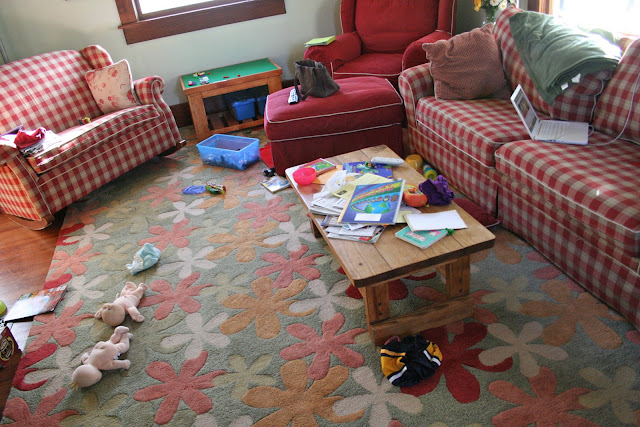 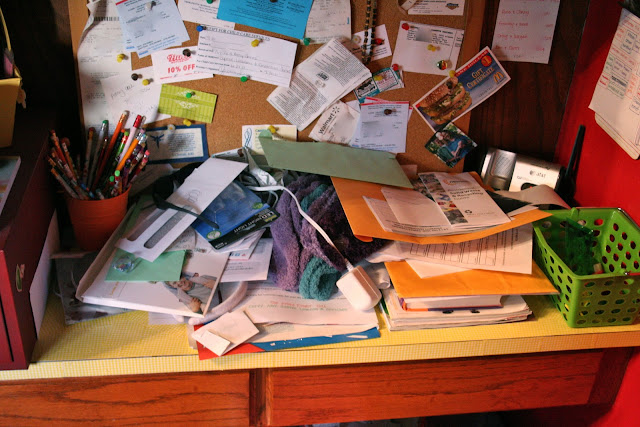 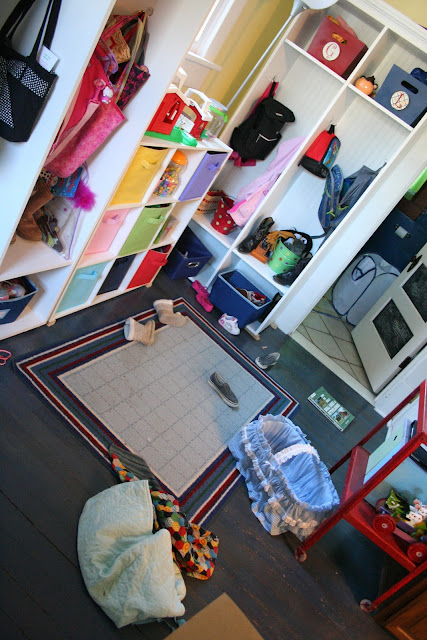 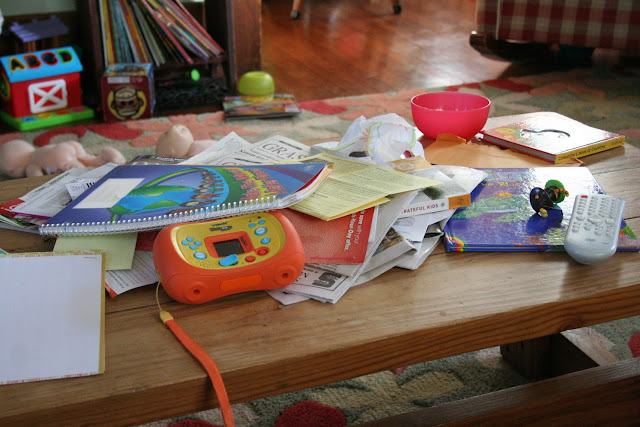 We do have a lot of toys. Last summer when I did my decrapifying, we got rid of a lot of them. We sold a lot at the garage sale, we donated some, we took some to a local consignment store and we gave some away. I actually just read a blog post the other day about having too many toys. And now I think we need to downsize more. Or at least put some away and rotate them in and out. Summer 2012, I guess. =)


We really need to do a better job of making the kids pick up after themselves. We're working on it.

** What are your favorite books to read aloud to your classes and your kids?
There are so many fun children's books out there. Read aloud is one of my favorite times in 1st grade. All kids love to be read to. We've been doing a little "author study" at different times this year and reading books by some of my favorite authors. So far we've read Eric Carle, Tomie dePaola, Steven Kellogg and Jan Brett. We'll read Leo Lionni and Dr. Seuss, too. Junie B. Jones is fun to read and I love Patricia Polocco's books, too, but they are probably better for 2nd grade and up. "Thank you, Mr. Falker" always makes me teary. I love reading Sandra Boynton books to Gretchie.


There are just so many, many great books. I'm sure I'm forgetting some of my favorite authors.

** What chores do you have your kids do? Do they earn money for doing them?
I did a post awhile back about our little clipboards with responsibilities. We kind of stopped that around Christmas and are just now getting back into the swing of it. For that we have 11 chores/responsibilities and they do get paid for them.


* Organized closet (so that cleaning your room doesn't become "throw everything in the closet")
* Organized cubby
* Organized dresser
* Shoes, coat, backpack put away
* Spot in the van clean (this is one of my favorites)
* Pray at a meal
* Write something on our Thankful poster
* Write a letter or note to someone
* Do something helpful without being asked
* Compliment your sibling (this is the one that's worth 25 cents)

If they do all these things, they get $1.25/week. 25 cents goes to church, so they can earn up to $1.00/week. They do have other things we ask/expect them to do that aren't included in the pay. (Helping set/clear the table, putting dishes in the dishwasher, picking up toys inside and outside, helping with Gretchen) Again, we need to do better as parents with consistency and following through.


** What is your most favorite thing to do with your kids together and by themselves with just you?
My kids have always been big snugglers. I love to just sit on the couch with them and watch a movie together. I love watching them draw, paint, and be creative or use their imaginations. They all love to be read to. (Sadly, I don't read to them as much as I should. Especially since Sophie and Lawson learned to read themselves.) But snuggling is a definite favorite. 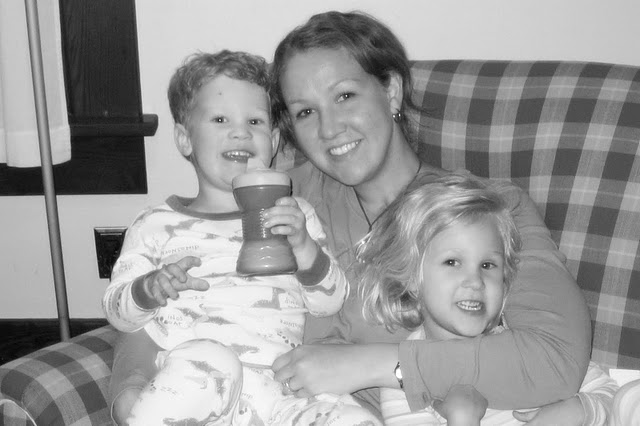 With each of them alone, their favorite things would probably be...
Sophie: shopping at Target
Lawson: playing a game
Gretchen: reading books
Posted by Amy at 5:25 PM

Soooo fun-thanks for sharing!!! I love the background on their names and I can't believe how much Sophie and Gretchie look alike as babies-wow! Target is my favorite shopping place with my kiddos too! Looking forward to more answers but make time to snuggle that sweet family of yours too! :0)

Thanks for sharing (although I think we've shared all this fun stuff together already!). I love the photos of you with your kids. I think those are always my favorites!!!

I love reading all your answers!!

So neat to find out the meaning to all your children's names. :o)

And SO refreshing to see we are not the only ones who put things on top of the dog crate. :o)

Loved all these! ANd I particularly loved the meanings on the names. VEry special -- you, rebel, you!! ha!

By the way, here is my last question? HOW DO YOU MAKE SUCH BEAUTIFUL BABIES?? Seriously, all gorgeous!

p.s. I love that Sophie's fav thing to do is shop at Target. She and I could be buds!!

I've been reading your blog for some time now, I came upon it via The Macs I think. I've always enjoyed it, being a busy working mom too but I'm seriously taken aback by the 'vinegar in the mouth' comment above. Were you joking?? Do you really do that?? I'm completely opposed to spanking but I find the idea of putting vinegar In a child's mouth even more unconscionable.

Carla... Yep. We really do that. They're not drinking it, but we dip our finger in and then "swirl" that finger around in their mouth. When we started doing it, we told them that the things coming out of their mouths needed to be sweet, not nasty and yucky like the vinegar. That's why we use it as a consequence for the way that they are talking vs. a consequence for how they are acting. Again... it's not something we do a lot, but they've both had it enough times to know that they really don't like it.

Wow, ok. Thanks for taking the time to answer.