Sophie and Lawson have asked if they can start getting an allowance.
Corey and I are trying to figure out the best way to start this.
(Ok... mainly me. He's just kind of going along with me.)  =)
I want to tie it in to chores somehow, but am trying to figure out the best way to do that.
We tried daily chores for awhile this summer and it just wasn't working out too well for us.
Mainly because Corey and I don't enforce them enough. Too often it gets to the end of the night, we have put them all in bed and we realize that we didn't have them pick up enough of their stuff. So then we end up doing it. Not proud of that, but it's the way it is right now.
So I'm thinking that we need to come up with some kind of weekly chore system. Things that need to be done over the course of the week (or that can all be accomplished in one day if they choose to wait...) and that doing a satisfactory job would result in an allowance.
I found this idea on Pintrest and really like the concept of moving the clothespins... 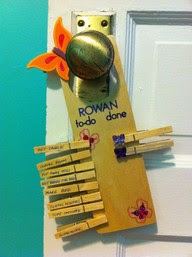 (Sorry... no source was listed with the picture.)
The kids have suggested a dollar a week. I think Corey and I are cool with that.
What I'm thinking right now is to come up with 10 chores... and they can earn a dime for each chore.
* Cleaning their room
* Closets organized
* Cubbies organized
* Their spot in the van clean (and food free)  (Seriously... this one would be huge!)
* Write a letter/kind note to someone
It would obviously be easiest on them if they kept this up throughout the week and didn't save it all for Saturday. But... if they did, they could still get these things done. And honestly, I'm thinking of doing it this way because I know Corey and I won't be on the ball enough to make sure that daily chores are getting done. (at least not at this point in life)
We would also like to start working on the whole saving/spending/giving concept with them. I've heard of people having 3 different jars and putting a little in each jar. How do you do that when you're dealing with dollar bills?? (I realize you can do coins instead of a dollar, but don't kids think it's more exciting to get a dollar bill than to get 10 dimes?)
So what do you think? Is there a better way to do this??
What other chores should we add to our list?
Thanks for any help or suggestions! =)
Posted by Amy at 2:22 PM

I have always heard that allowances should not be tied to chores. That chores are something that kids should just do as part of a family and they should not be paid to do them. I am not sure how I will put this all in practice yet, although. I do love the idea of weekly chores and the clothespins. I may steal that one.

I agree that there are chores they should do just b/c they are a part of the family. We will still have them help set/clear the table, help with Gretchen, etc. I just don't want this list to be something that I have to remember whether or not they did it everyday. That's too much remembering for this frazzled mommy's brain. :)

We do allowance tied to doing chores in our house. My son does more than what he earns as allowance just because it's needed and it works for us. Once he gets a large amount, I do take some of it and send to the college fund. The rest if he wants a magazine or something then it comes from money he's earned and not my pocket-just easier that way. My suggestion if doing the dollar per week and three jars-split it evenly at the end of the month deciding where more will go and that way you can still use the dollar bills. Good luck and do what's best for your family.

We do allowances at our house but not tied to chores...(mainly the hubby's idea here..he grew up with them not tied to chores, however I did grow up with them tied to chores) but the girls have learned this way that there are things they just have to do. Anyway, we still give it to them in coins, mainly to work in money counting and identification (for Addison)and then also have them save and take 10% to Sunday school (which is only a dime, but still, it's something to he wanted to get started)

hi Amy :) i read a really good blog...the blogger is a momma to 5 children. while i do not share their religious beliefs, they have an awesome way of doing things for allowances... (and parenting, in general...i love to hear how they handle ALL things parenting...so wise and good!) they also practice saving and enforce tithes, etc. :) if you do a search on her blog, you should be able to find some links to some of her posts about how they run allowances, etc. :) her blog is: http://www.71toes.com/ hope that helps! :) robin :)

I think one thing to clarify is the primary purpose: getting chores done, teaching about money. I know, it is both, but I think that there is always a primary focus and if you are convicted about that, your plan will work, however you choose. We never paid our kids allowance, I'm undecided if this was wise/foolish. Our kids are expected to help with household chores and yardwork. Mostly, what I'ver heard from other parents is the whole allowance and chores thing turns into conflict, and from the kids I've often heard that the parents don't remember to pay, neither sounds great to me.
So, that's feedback from my neck of the woods.
MJ

Amy,
I've also heard not to pay for chores...at our house it's family contribution....you do your share because you are part of the family.....and being responsible/helping is part of life. (That being said, Brian and I fall short on enforcing them to help out.) We recently instituted a no electronics rule til their stuff is picked up....that makes it easier for me to remember. good luck!

We just started this idea this week.
They have 5 chores to do each day (make bed, pick up their room, water/feed the dog, brush their teeth in the morning, and brush their teeth in the evening). They get $1.25 per week if they do all of it each day (we initial each day to make sure it's getting done). And then no matter how much they get at the end of the week they have to give 25 cents to church. So, they have the chance of earning $1/week for themselves. I really like the clothespin idea though, too. I know it's getting money for doing daily chores, but I feel that once they get in the habit of doing those and it's not something they need to be reminded of daily, then we'll start deleting old ones and adding new ones. They can also get "extra" money for doing extra chores (like unloading the silverware in the dishwasher, etc.

We have gone back and forth on the whole allowance thing too. We finally decided not to do an allowance, but if they want to earn money for certain things then they can do chores above and beyond what they normally have to do. That way they learn how to earn money and how they can save it for something that they want.